Based on the original but smaller Shore-Line, the Atlantic is every inch a contemporary sea-touring kayak. Featuring the combination of a shallow "V" hull and soft chines the Atlantic gives the perfect blend of speed, responsiveness and predictability. These attributes boost confidence in the less experienced whilst allowing the more experienced to push themselves even in the more challenging conditions.

The latest incarnation of what many regard the benchmark 16ft kayak of recent years and a good choice for anyone seeking a sprightly kayak in the category. The Atlantic LV is one kayak that really can do it all: ocean, sea, lake or river the ideal first composite kayak.

A UK made expedition sea kayak featuring a sleek and efficient hull with minimal rocker. Glide effortlessly on calm waters and tackle big ocean with efficiency and responsiveness. Available in a 16ft 10in low volume and 17ft 2in high volume option.

A combination of shallow 'V' hull and soft chines, the Atlantic LV RM gives the same blend of speed responsiveness and predictability, as its big brother, but scaled down for the smaller paddler.

The Atlantic RM gives the same blend of speed responsiveness and predictability, as its composite namesake. The combination of its tough RM shell and several unique design features makes this one of the safest and best value plastic sea-touring kayaks currently available.

The North Shore Aspect RM has been focused towards avid sea kayakers, who want the build and design features of an expedition level sea kayak in a more compact, manoeuvrable and easy to handle package. Available in standard and low volume sizings. 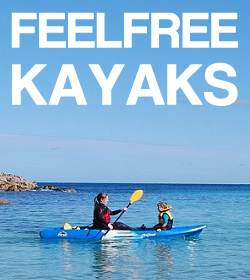